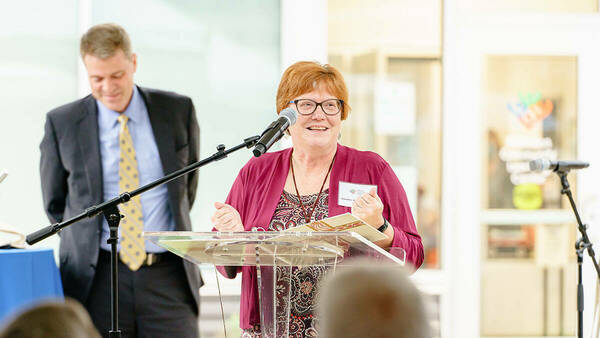 The Notre Dame Robinson Community Learning Center (RCLC) held a blessing and dedication Tuesday (Sept. 21) for its new home at Eddy and Howard streets in South Bend, across from the new Trader Joe’s store at Eddy Street Commons.

RCLC Adult Programs Coordinator LuElla Webster delivered the opening prayer, while Martez Cuevas, a fourth-grader at Kennedy Academy in South Bend and a member of the Robinson Shakespeare Company, performed a monologue from Shakespeare’s “A Midsummer Night’s Dream.”

Notre Dame President Rev. John I. Jenkins, C.S.C., and President Emeritus Rev. Edward A. “Monk” Malloy, C.S.C., jointly blessed the building, which was financed in part with support from the city of South Bend, Kite Realty (primary developer of Eddy Street Commons), the Judd Leighton Foundation, PNC Bank, the Chicago Blackhawks and the National Hockey League, among others.

“Renelda Robinson often prayed: ‘Thank you, God, for one more day in this life, and let me do some good in it,’” Father Jenkins said, referring to the RCLC’s namesake. “We gather this day to give you thanks for the great gift the Robinson Community Learning Center has been to this community, and for the gift that this new building will be in helping us ‘do some good.’”

Father Malloy said, “Send your blessing on this center and all who will come through its doors as they seek to encounter and use the gift of learning. Send your spirit of wisdom and knowledge upon all who will gather in this place so that they might be beacons of light to others.”

“She was passionate about the city, passionate about helping people rise out of poverty,” Cullinan said of Robinson, whose daughter, Marguerite Taylor, a lifelong resident of the Northeast Neighborhood and an early supporter of the RCLC, was among the 200 or so in attendance for the dedication. “We hope she’s looking down from heaven with a smile on her face at all the good that’s taken place in this facility.”

McGowan, for his part, described the new building as the “crown jewel” of Eddy Street Commons, which in addition to the RCLC includes hundreds of apartments and townhomes and thousands of square feet of office, retail and hotel space along Eddy Street just south of campus.

“What the University has done, dating back to Father Malloy and then of course with the support of Father Jenkins, is remarkable,” McGowan said. “The number of people, the number of kids that pass through this building makes us extremely proud to have been a part of that.”

The RCLC moved into the building from its original home inside the former Goodwill store at Eddy and Howard streets last summer, but was only recently able to welcome the public to the space because of the pandemic.

Designed with input from neighbors and members, the 12,600-square-foot facility features new and expanded learning and performance spaces, including a black box theater, a preschool classroom, a multipurpose classroom, a makerspace, a library, an industrial kitchen and an outdoor play area.

It also features new and expanded office and meeting spaces and a lounge for staff.

Inviting people to explore the facility and enjoy free cookies and ice cream, Knapp Beudert, the RCLC manager, said after the blessing, “I can’t tell you how exciting it is for us to welcome the community into the new Robinson Center. We waited a long time, but the day is finally here.”

Established in 2001, the RCLC is an off-campus educational initiative of Notre Dame, offering educational programs for children and adults, as well as classes, clubs and lectures for seniors.

Originally published by Erin Blasko at news.nd.edu on September 24, 2021.