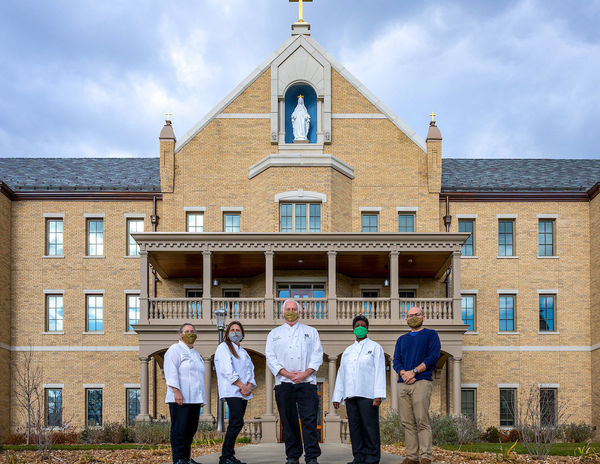 From left to right: Laura Weise, Gail Pursell, Alan Seidler, Jackie Coleman and Scott Lanier are part of the dining services team keeping the kitchens at the religious houses cooking, including the one at the new Corby Hall.

It has taken heroic efforts to ensure meals continue for the religious community at Notre Dame during the pandemic.

There are five religious houses on campus, and more than 200 Holy Cross religious call one of them home. The kitchens in those residences are busy every day of every year, including holidays. Not even a global pandemic interrupts this schedule.

Behind those hundreds of meals is a chef and a team for each house who have continued to prepare and serve food without pause since news of the pandemic broke in March.

“We don’t stop serving meals to our residents, ever,” said Scott Lanier, program director for dining and nutrition services for religious houses. “This is home for them.”

Along with a total culinary team of 55 staff members, the chefs prepare and serve daily meals to about 250 religious members in two provinces (the Midwest Province of Brothers and the United States Province of Priests and Brothers). Since some of the residents are in the most vulnerable population with age and health conditions, the protocol and nutrition requirements are strict and serious.

Lanier oversees the dining teams and knows firsthand the importance of those meals. The pandemic necessitated new safety protocols and training. Lanier and Chris Abayasinghe, senior director of campus dining, have been with the dining teams every step of the way while working closely with the Holy Cross leadership to make the changes as painless as possible for the priests, brothers and men in formation.

“If there’s a group of unsung heroes on campus, it’s these chefs and their staff,” Abayasinghe said.

Alan Seidler, chef manager at Corby Hall; Laura Weise, chef manager at Holy Cross House and Fatima House; Jackie Coleman, chef manager at Moreau Seminary; and Gail Pursell, chef manager at Columba Hall, all implemented new processes and systems overnight due to the coronavirus, as they kept up their constant schedules. Their teamwork, along with their flexibility, blazed the trail for campus dining across the University.

The new processes and protocols dominate their kitchens and dining rooms today, and they have deep gratitude for their staff members. “Everyone left campus and we were still here, pulling together. All of my employees came to work every day not knowing what would change next, or what would happen,” Pursell remembered.

From single-serve items like salt and pepper packets replacing shakers, to plastic cutlery and pre-plated salads, to tray service in rooms when necessary, the staff quickly implemented dozens of safer, no-touch systems that were new to all. But it’s the decreased interaction with the men and the community itself that makes this time especially difficult, Weise said, for the Holy Cross House residents and her team.

“With masks and safe distancing, it’s too hard to talk with them like we’re used to,” she said. “I can’t wait to just have conversations with them again, and I know they’ll be happy when we can too.”

The houses are quieter without visitors and the meals aren’t as lively without friends and family members joining the tables. “Making the meals that remind them of home on their journey to ordination and having their families join them at Moreau for Sunday dinner or feast celebrations again will be great for everyone,” Coleman said.

“We’ve all come to appreciate more than ever when we can gather for meals. It’s not just about going to the food trough. It’s about community, the common experience and quality time of being at the table together,” he said.

Because of the initial challenges the dining teams overcame, their fast-pivot success is a beacon of knowledge for the rest of the campus dining community. “We had figured things out. We were beyond the newness and shock of the situation and we were moving forward,” Lanier said. “We had a lot of information to share.”

And share they did. Lanier is proud to be an inspiration to the greater campus food service community. Their best practices were carried over into the restaurants and dining halls with the integration of teams across campus.

“We can give suggestions and ideas for how to get the work done as safely as possible. We feel a part of dining services in an important way because of this time,” he said.

There’s also a closeness between the staff and house superiors that has grown, as Father Thesing explained. “We’ve had to communicate so often, work out details for different solutions, rely on the expertise of food service leadership and trust each other,” he said. “Each house is unique and separate, but we’ve all come together for one goal: to keep everyone safe.”

In addition to navigating the food preparation pivots, Seidler opened the brand-new kitchen in the newly constructed Corby Hall, which was completed in May. He trained new team members, six who were reassigned to his staff, and he led the kitchen setup during the summer.

“Barb and Emily helped organize storerooms, lined glass and dish cabinets — the things you’d do to set up your home kitchen, because this is a home. Support from Campus Dining and others on the University Enterprises and Events division staff made things much easier.”

As if responding to a pandemic and opening a new kitchen weren’t enough work, Seidler added delivery processes to his plate.

While the Corby Hall residents were living at residence halls awaiting the completed construction, they would gather at the Presbytery, behind the Grotto, for meals. This abruptly ended because of the pandemic — it was too small for the men to physically distance. Instead those meals were delivered to their rooms throughout campus. And when students came back to campus in June to retrieve their personal items, some of those same residents moved off campus temporarily — to the congregation’s residence in LaPorte — for extra distancing safety. Seidler and his team made sure all of the men received their three meals every day, no matter where they were.

“The logistics were so difficult … to make sure everyone had the food they needed in all of their different locations, with changes on a daily basis sometimes. It is more than commendable how well Alan and his team handled things,” Lanier said.

Other positive aspects of a year filled with challenges, according to Lanier and the chefs, include being efficient with resources, learning to plan ahead and welcoming four new priests who were ordained in September instead of April, perhaps the brightest silver lining of the year. They joined the men who were ordained deacons for their final vows. With a single weekend (instead of two celebrations) for two classes that brought together far fewer people than typical, and food that was prepared and served safely, it wasn’t a traditional ordination, but Father Thesing said he had complete confidence the dining services teams would create an event that honored the men, despite the limitations.

“We’re so proud of that weekend because it became yet another test case for the University — to hold events with all of the protocols in place. Plus, in this case, four new priests were added to the congregation; it was a great success,” Lanier said.

The Holy Cross religious are continuing to quarantine and stay in the bubbles of their houses, especially because of the age-related and medical vulnerabilities of some residents. And for that reason, the men are even more grateful to the dining staff, Father Thesing said. “I commend each of them; they never had an option to stay home,” he said. “They’ve asked themselves, ‘How am I willing to change my life to make sure everyone here is safe?’ We have so much gratitude for them.”

While they don’t know how much longer they have to keep these processes in place, with all of the uncertainty of the pandemic, Father Thesing said, one thing is certain at the religious houses: They are confidently prepared.

“When you run through the worst-case scenarios and have solutions in place, which we did extensively, it eases the stress,” he said.

Lanier added that 2020 has been a good teacher for everyone, staff and residents alike.

“We feel ready to take on whatever is necessary. Our systems are in place and we can handle whatever comes our way, without fear,” he said.