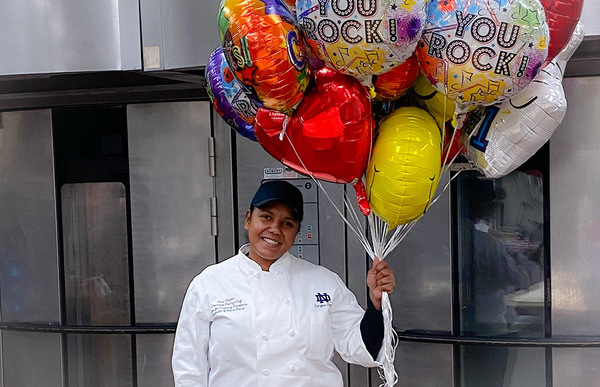 When deciding to indulge in a tasty dessert, ingredients like black garlic and beets aren’t usually a go-to flavor choice. But taking risks with uncommon flavors helped to lift University of Notre Dame executive pastry chef Sinai Vespie into the finale of the Food Network “Halloween Baking Championship” series. In an episode that aired on Monday, Oct. 26, Vespie bested two other bakers in the finale to win the annual television network holiday competition.

Vespie exclaimed “What!?” when her name was called, landing her the title and $25,000 grand prize. “I was very surprised,” she said.

The competition, which was filmed in July in a temporary tent kitchen at Terranea Resort in Los Angeles, began with 10 professionally trained and self-taught “home bakers” competing in multiple rounds of dessert baking challenges. The seven-episode competition was judged by noted pastry chefs Carla Hall, Zac Young and Stephanie Boswell. Each episode featured Halloween-themed timed challenges and included trick twist ingredients inserted into the recipes after the contestants had started to prepare their desserts. One contestant was judged out of the competition in each episode.

Vespie has competed in other baking contests throughout her career, but nothing as intense as this show. “I perform best when I’m put on the spot,” she said. “Having a strict time limit forced me to push my creativity and take chances outside of my comfort zone.”

Throughout the show, whether it was an unusual choice that she made or one assigned by the judges, in the end, it was the flavors in Vespie’s creations that won over the judges.

In the first episode, the bakers had to make their biggest fears come to life in the shape of a haunted house cake. Vespie’s creepy homemade toffee spiders adorned a mausoleum made from dark chocolate stout cake with salted caramel buttercream layers, a peanut butter ganache and a toffee crunch.

The following episode required bakers to construct a Halloween-themed croquembouche, a tower of cream puffs, and include an illusion element of falling candy. Vespie’s lemon candy creation failed to wow the judges and the Mishawaka resident found herself in the bottom two contestants. She narrowly escaped elimination and noted, “Things didn’t go right for me that day. So, I made sure to taste every element of my desserts after that round and really step up my game.”

Vespie bounced back in the following episode to finish as the top baker with her “Vampire Buffett” of one dozen of three different types of mini desserts. She used that contest’s black garlic trick twist to make a jam for her shortbread cookies. The judges complimented her creativity, saying it was the best use of the nontraditional baking ingredient in the competition.

From there, she advanced through the following round where she made a demon doll cake from modeling chocolate and red velvet cake. In the next episode, she was challenged to incorporate beets (which she incorporated in a purée and candied), Fresno chili peppers (which she worked into a glaze) and a faux fire element in her dessert which was a crème fraiche and tangerine parfait. Judge Young called her plated dessert “heavenly” and asked for her recipe.

Vespie’s artistic side took center stage in the next round where she made a two-tier cake based on a leopard Halloween costume. The judges noted her impressive hand-painted animal print work on her vanilla bean cake with rum compote and Swiss meringue buttercream frosting.

Finally, as one of four remaining bakers, she competed in three heats in the final episode. Her first challenge was to make a lifelike severed limb cake, which she shaped into a leg with a toeless foot, made of flourless dark chocolate cake with cream cheese and guava filling and rice cereal treats. When she finished in the bottom two of that challenge, Vespie competed in a head-to-head bake-off where she had one hour to make a goblin-themed plated dessert without one basic baking element, wheat flour.

On the show, she said, “Thank goodness I make gluten-free desserts at work all the time.” She substituted almond flour in her brown butter financier, a French almond cake. Her goblin heads were made of raspberry mousse mounds on top of a financier circle with a swirl of chocolate ganache piped on to resemble wrinkled skin. Using fondant and modeling chocolate, she added goblin features. Vespie won the bake-off and advanced to compete against two other bakers in the final challenge — a three-tier floating cake, a baking technique she had never done before.

The seemingly gravity-defying cake is assembled on a rod and literally hangs inverted from a pole with the smallest tier on the bottom and space between the larger layers above.

After the final, four-hour challenge, Vespie was convinced that she was not bringing home the title. “When I saw the other two contestants’ floating cakes and the amount of detail they had, I thought for sure I was done.”

But in the end, her orange vanilla cake with chocolate coconut ganache and passion fruit buttercream took the cake. The judges described her creation as “a mathematically perfect combination of flavors” and “the best bite she made all season.”

Back on campus, Notre Dame students get to experience Vespie’s talents on a daily basis in the dining halls. On Halloween weekend, Campus Dining treated diners to four of Vespie’s competition desserts in the dining halls: her dark chocolate stout cake with salted caramel buttercream from episode one, her mother-in-law’s red velvet cupcake recipe and white chocolate cherry cheesecake vampire ghosts that she used on the Vampire Buffett in episode three, and the championship orange vanilla cake from the finale.

Vespie says she is still catching up on congratulatory social media messages, texts and calls from friends since the show aired. “It was a huge secret to keep for months,” she explained, since she was contractually obligated not to tell anyone how she fared before the finale aired on the Food Network. “I didn’t realize the impact that the show would have on people. I’ve received messages from so many people telling me how I’ve inspired them. I’m so happy that I had the opportunity to share my passion and ignite that same feeling in others.”

Floating in her office is a large bouquet of colorful balloons from her manager celebrating her win. “I’m super proud to be a part of the Notre Dame family,” she said. “And that I was able to represent the University in such a great way.”