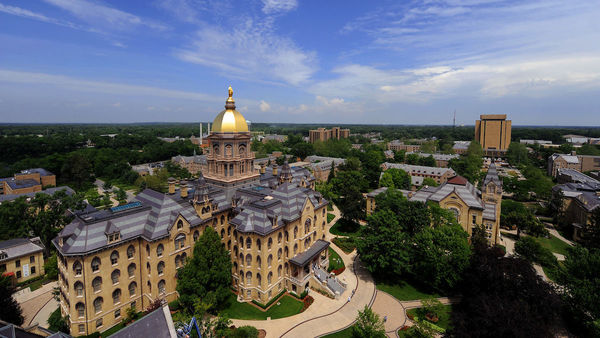 Charitable giving to the University of Notre Dame as measured by both the number of donors and the impact of small- and medium-sized donations is dramatically different when compared to a precipitous decline nationally, and these contributions are making a significant difference in the lives of Notre Dame students.

Nonprofit Quarterly (NPQ) magazine reported in its 2019 winter issue on the “steady decline in the proportion of Americans who report making donations to charitable organizations … with 20 million Americans having decided between 2000 and 2016 to stop contributing.”

Laura Livingston is a 2015 Notre Dame alumna who made one-time contributions her first two years out of school, and, since having a heart-to-heart conversation with her mother in 2017, has made $50 monthly contributions — 29 consecutive months and counting.

“My mom reminded me — actually lectured me — about all that Notre Dame and its donors had given me through the financial aid package that allowed me to attend the University,” said Livingston, who works for Habitat for Humanity in Baton Rouge, Louisiana. “I realized she was right, so I decided to start making small monthly gifts back to my alma mater to pay it forward, in hopes that it might make a difference in someone else’s life. My mom passed away a year ago. I hope she’s proud of me and my continued commitment to give back to Notre Dame everything that the University and its donors have given me.”

Also in its winter issue, NPQ reported that “big donors have grown and small/medium-sized donors have gone away,” adding that “there is no doubt that the change in the tax laws will affect this picture moving forward (as the number of itemizers plummets, given the tax bill changes).”

Between 2002 and 2016, NPQ reported, the percentage of small- and medium-sized donors fell by 14 percentage points.

Notre Dame, on the other hand, has been the recipient of increasing support from alumni, parents and friends who make annual gifts of $50 to $200. Nearly 44,000 individuals made such donations in 2016, a 38 percent increase since 2002.

These contributions are making a real difference and belie the commonly heard refrain that small gifts “don’t matter.” The gifts of $200 or less by almost 50,000 individual donors in the 2019 fiscal year made it possible for Notre Dame to provide 43 students with a full cost-of-attendance financial aid package — including tuition, room, board, fees and other costs.

Lou Nanni, Notre Dame’s vice president for University relations, said, “Anytime someone tells me that a small gift doesn’t matter, I say look in the eyes of one of these 43 students who is here because of such gifts.

“We remain grateful that so many alumni, parents and friends care so deeply to give back to Notre Dame each year.”

Originally published by Dennis Brown at news.nd.edu on December 09, 2019.