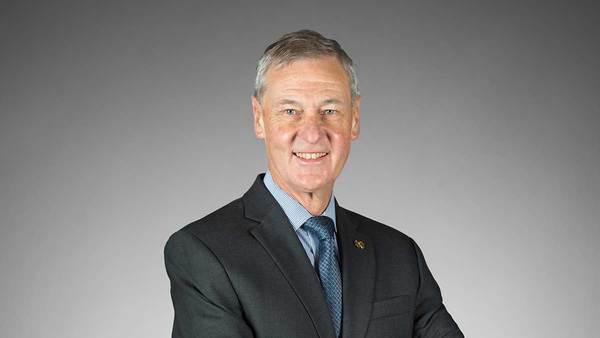 When John Affleck-Graves came to Notre Dame in 1986 as a member of the finance faculty, the Rev. Theodore M. Hesburgh, C.S.C., was the University’s president. There were 99 buildings on campus, about 7,500 undergraduates and less than 3,000 faculty and staff.

Today, there are twice the number of buildings, 8,500 undergraduates, almost double the number of faculty and staff, and a renewed commitment to a campus plan that guides the development of this beautiful pedestrian campus with carefully composed of quadrangles, distinctive buildings and iconic sacred spaces.

Although John was one of the new faculty members in the College of Business in 1986, his innate leadership ability was immediately apparent. He shared his passion for running marathons with other faculty in the department, and within a year his colleague Rick Mendenhall, now professor emeritus of finance, was running a marathon. Soon after, John was mentoring a half dozen other faculty in the department to run marathons as well.

Even before John became chair of the Department of Finance, he made a significant contribution to the department by taking the lead on changing the nature of its Committee on Appointments and Promotions, which plays a critical role in hiring, tenure and promotion decisions. In the past, the committee had consisted of only four members, but John felt strongly that including all tenured faculty in the department would result in prudent decisions. “Although John was newly tenured and, therefore, still a somewhat junior faculty member,” Mendenhall recalls, “he was able to get this change approved. I have no doubt that this change has made us a much stronger department over the years.” 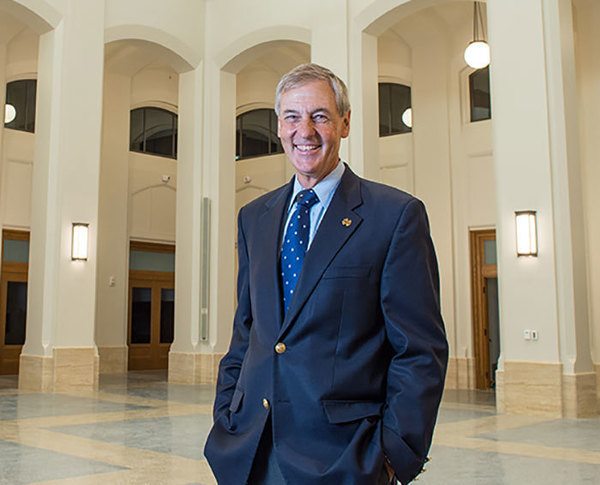 Executive Vice President John Affleck-Graves poses in the Forum of Jenkins Nanovic Halls. The halls are two of dozens of campus buildings constructed during his 15 years as the University’s chief financial officer.

In 2004, after serving as vice president and associate provost, John was elected as the University’s first lay executive vice president, a role that, by all accounts, he has fulfilled with great wisdom, exemplary dedication to the mission and sincere humility. By carefully managing the University’s finances and diverse physical and human resources, he will leave Notre Dame in an enviably strong financial position. His fiscal discipline was not void of the consideration of the people impacted. One of John’s proudest memories is the way leadership responded to the 2007-2009 recession. During that time, the University did not lay off any employees. Instead, the University was prudent with its resources, so that families would not be impacted.

Together with President Rev. John I. Jenkins, C.S.C., and Provost Thomas G. Burish, John led the Advancing Our Vision initiative beginning in 2011, which identified and implemented financial efficiencies that gave the University the funds to strategically grow research in key areas where Notre Dame could truly make a difference in the world. Those funds fueled the growth of the Strategic Research Investments and funded 80 faculty positions across the University.

Many faculty and staff will recall John often says, “Our greatest resource is our people.” Despite his busy schedule, John made it a priority to meet new staff every month during Coffee and Conversation, to offer one-on-one meetings each semester to all staff across the University, and to invest substantially in professional development opportunities for staff.

Always driven by data, John saw the need to develop managers after he and other senior leaders reviewed ND Voice data that showed room for improvement. To address that need, the University has increased the budget for professional development 20-fold over the past 10 years, and recent survey results prove that the investment is worthwhile.

The Leadership Rotation Program that began in 2009 and the newly named John Affleck-Graves Excellence in Leadership Program have been transformational for so many promising leaders who have participated. Each cohort experienced new areas of the University, new people and new leadership concepts.

“The programs have had a profound effect on me personally and professionally,” explains Kathryn Valenti, the strategic planning program director. “One of the most meaningful moments in the programs for me occurred several years ago when I sought guidance from John about a project that was not going as planned and even began to cry in John’s office. I figured this was a career-ending move in the making, but John showed nothing but compassion, patience and kindness.” John’s commitment to invest in staff and develop their talents will continue through the Excellence in Leadership Program named in his honor.

John’s impact on the University of Notre Dame will be remembered for years to come — by the students who receive the financial aid that makes a Notre Dame education possible, by the staff who will grow in their careers through professional development and advancement opportunities and by the faculty who know him as a fine professor and a trusted administrator.

As Father John so eloquently says, “The University has benefited immeasurably from John’s intelligence, good judgment, leadership ability, tireless work ethic and, above all, his devotion to Notre Dame and its mission.”

During his 15 years as the University’s executive vice president, John Affleck-Graves shepherded the greatest expansion and modernization of Notre Dame’s physical plant, including research and residential facilities, while stewarding a huge increase in financial aid for our students. He also helped initiate a regional economic renaissance.

2010        Office of Campus Safety forms, bringing together the risk management and safety, police and fire departments