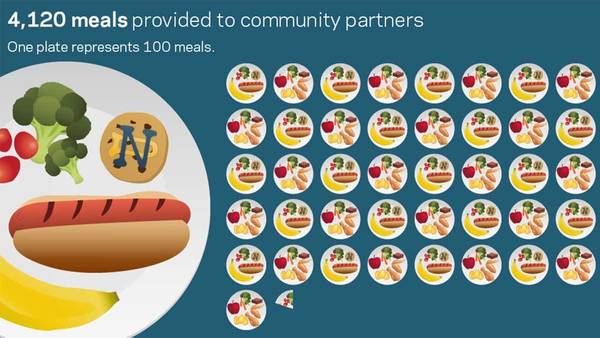 Levy, the food service provider for Notre Dame Athletics, has expanded its partnership with Cultivate Culinary School & Catering to Purcell Pavilion and Compton Family Ice Arena, further contributing to sustainability efforts on campus and to food security and job training in the community. The move comes after a successful start to the partnership highlighted by the rescue of more than 7,000 pounds of unserved food from Notre Dame Stadium over the course of six home football games this season. That included:

• 985 pounds of protein, including chicken and beef.

• 1,102 pounds of starch, including potatoes and pasta.

The amount of waste diminished over the course of the season as Levy adjusted to the demand for food at the newly renovated stadium, which expanded this year to include new event spaces, clubs and suites.

“We were extremely pleased with the results of our partnership with Cultivate throughout the football season,” said Karen Schirmuhly, director of operations for Levy at Notre Dame. “We are grateful to be able to help the community and work with such wonderful partners.”

Jim Conklin, president and cofounder of Cultivate along with chef Randy Z, said, “Our partnership with Levy and Notre Dame has been great. Notre Dame has a significant sustainability goal and we get to play a small part in helping them to achieve it.”

Cultivate also works with Nelson’s, Fresh Thyme, Century Center and Rise & Roll. It has rescued nearly 40,000 pounds of food from those partners, and Levy, since August, when it first entered the food rescue business.

“Randy Z and Jim Conklin are an inspiration to all of us. They are selfless, tireless service warriors who continue to make a dramatic impact on decreasing food waste in our community,” said Maureen McNamara, who serves as assistant director of athletics for Community Commitment, a division of Notre Dame Athletics.

“Promoting food rescue and sustainability, while providing nutritious meals to the needy, is a direct reflection of our Catholic faith,” McNamara said, “and Notre Dame Athletics is proud to partner with Cultivate Culinary and Levy in this effort.”

A nonprofit based in South Bend, Cultivate, with help from Stanz Foodservices and volunteers, processed and distributed the food to other nonprofit groups, including health care providers and food pantries, in an effort to fight food insecurity and train at-risk youth and adults for jobs in the culinary industry.

“We look forward to continuing to make donations to Cultivate throughout the basketball and hockey seasons whenever possible,” said Schirmuhly.

As before, the food will be processed, frozen and distributed to local nonprofits in the form of pre-packaged microwavable meals. The meals will include a meat, starch and vegetable. They will help to feed the elderly, those with mental and physical disabilities, low-income individuals and families, individuals and families with medical problems or issues and other vulnerable populations.

As part of a broader volunteer effort within the athletics department, Notre Dame athletes will assist with the process beginning next semester.

In addition to food rescue, Cultivate is partnering with Goodwill Industries of Michiana on a job-training program for at-risk youth and adults. It previously partnered with The Crossing, an alternative high school in South Bend, on a similar program for at-risk teenagers.

"While we continuously look for ways to reduce waste of any kind, with the multitude of athletic events here at Notre Dame, the reality is that we have excess consumable food. So we then look to the second ‘R’ — how can we reuse what we have,” said Carol Mullaney, senior director of sustainability and continuous improvement at Notre Dame.

“It’s wonderful to have partners like Levy and Cultivate Culinary who are working together to ensure that any excess food is redistributed to area agencies serving people in need,” Mullaney said. “Because the pilot program during our football season worked so well, it is being expanded to cover the basketball and hockey seasons."

Cultivate is one of three food rescue groups on campus and is part of an effort led by the Office of Sustainability, Campus Dining and various community and campus partners to reduce food waste and contribute to a healthier overall environment.

In addition, Campus Dining uses smaller trays at South Dining Hall — and discourages their use at all dining facilities — to reduce waste and recycles raw and edible scraps for agricultural use, including as fertilizer and cattle feed.

Originally published by Erin Blasko at news.nd.edu on December 21, 2017.