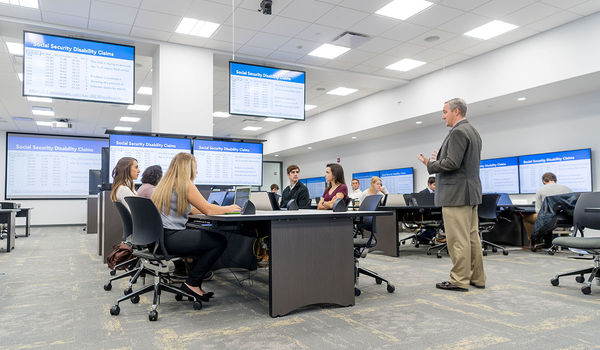 At its heart, the remodeling of Giovanini Commons was meant to satisfy a technological need. A need that had become urgent.

Two new business analytics programs began in fall 2017 at the Mendoza College of Business: a bachelor of science for undergraduates and a dual-degree MBA/MSBA (master of science in business analytics). As these programs address an increasingly important area of business — exploring and analyzing data for business decision making — they also require a specific kind of classroom space.

At Mendoza, the existing four computer classrooms weren’t quite sophisticated enough or large enough to accommodate MBA/MSBA classes. The largest computer classroom accommodated 45 students and the need was for up to 70. So a new tech classroom was imperative, and Giovanini Commons, in Mendoza’s basement, ultimately was chosen as the best spot.

“Launching these two programs while supporting the range of innovative, immersive teaching styles embraced by our faculty, would simply not have been possible without this new technology classroom,” says Rob Easley, department chair of IT, Analytics, and Operations, who helped plan the classroom.

“The new classroom is able to seat a full core section of the MBA program, with typical enrollment in the 60s, while still allowing breakout sessions in teams of up to six students each.”

For nearly 20 years, the Commons, known for their orange walls and open, purple-black ceilings, had been used for workshops, special presentations and classes focused on innovation and creative thinking.

Now, beyond installing a new tech classroom, Mendoza administrators and University architects saw an opportunity to transform the Commons space into a light-filled, welcoming area for all students.

In other words, a “thoughtful making of space” to fit today’s needs.

“The difference between renovation and remodeling is this,” explains Rev. Mark Thesing, CSC, director of administration for the Mendoza College and overseer of the Giovanini Commons project. “Renovation is painting and surface projects. Remodeling is tearing down walls.

“We knew Giovanini Commons needed to be remodeled, not just renovated. We knocked down walls.”

The layout of the Commons is basically a large hallway, and the space for the tech classroom lay at the south end of the Commons. So with that end marked for transformation, the planning team decided the time was right to rework the entire Commons area.

“We reviewed it with the idea of really maximizing student use, not just for business analytics students,” Thesing says. “We wanted to provide opportunities for individual study and collaboration, as well.”

Aesthetics were imperative, too. If Giovanini Commons formerly was known for appearing dark and cave-like, the new space is brightly lit and color-coordinated with the rest of the building in cream, light gray and blue with gold and copper accents. The overall look is updated-retro with geometric wallpaper, curvy tables and oversized drum-shaped light fixtures.

“No one can believe it’s the same space,” Thesing says.

ENTRYWAY TO THE COMMONS: CLASSROOMS L61 and L62

Two new classrooms, L061 and L062, have a more standard appearance than previously and feature a finished ceiling. A foldable door remains between the two rooms to create one large space. The former rolling tables and chairs have been updated. L061 hosts classes and can also be reserved for other uses. L062 is dedicated primarily to Foresight in Business and Society classes, a signature undergraduate research course that requires extensive team collaboration.

Storage space has been converted into two new study rooms that feature a table, five chairs and a wall-mounted monitor. Students use them on a first-come, first-served basis.

The middle of the Commons holds four L-shaped, back-to-back study booths.Two booths have moveable low tables similar to coffee tables. Two booths have higher tables that can’t be moved. The booths share tables just big enough to hold a laptop. All booths are equipped with outlets for charging electronics.

One of the Commons’ most intriguing features is four isolation pods reminiscent of first-class seating on an airplane. They feature opaque privacy walls, laptop tables on swinging arms, adjustable reading lights and outlets for charging.

A former kitchen has been converted to a student study lounge that features three tables with four chairs each, a sink, two microwaves and a drinking fountain with a water bottle filler.

The stretch of hallway alongside the tech corridor has been converted into four collaboration areas. Spaces feature a whiteboard, wall-mounted monitor and easily movable sofas, desks and tables.

The tech classroom accommodates up to 70 students and houses 90 monitors and screens; 92 if you include two permanent monitors at the instructor’s podium. In all, there are 107,600 square inches of screen in the room — nearly the equivalent of a 500-inch (41-foot) television.

Even though the new space just opened without fanfare in the fall, students quickly discovered the space. On a typical day, every area is occupied. And, Thesing points out, graduate students can use the space 24 hours a day and undergraduates can stay until midnight.

“So far, this project has turned out better than we even imagined,” he says. “It’s great to have had the opportunity to enhance our students’ experience at Mendoza.”

Originally published by Christine Cox at mendoza.nd.edu on January 11, 2018.