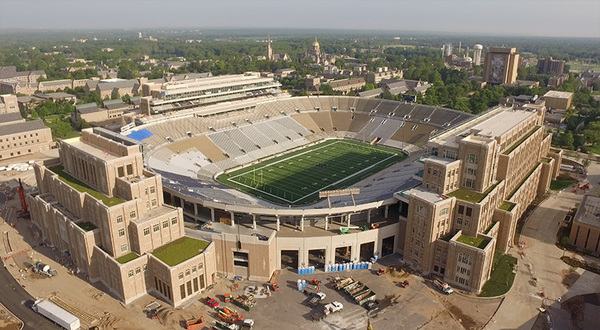 The largest construction project in the 175-year history of the University of Notre Dame – an 800,000-square-foot integration of world-class space for teaching, research, performances, faith, multimedia, student life and athletics – is nearing completion, with several components now open or opening over the next two weeks and most of the other facilities ready for occupancy in January.

“The addition of these three new buildings – Corbett Family Hall, O’Neill Hall and Duncan Student Center – creates remarkable opportunities for us to advance Notre Dame’s mission as a place of teaching and research, education of the whole person, faith turned to service, and community,” said Rev. John I. Jenkins, C.S.C., Notre Dame’s president. “These new facilities will draw together varied activities that are central to the life of Notre Dame, benefiting all those who study, teach, live, work and visit here.

“We are grateful beyond measure to the benefactors, planners, alumni, builders, staff, faculty, students and so many others who have been integral to the completion of this wonderful addition to the Notre Dame campus. It will, I know, serve the University well for generations to come.”

The project included construction of three new buildings and fan enhancements to Notre Dame Stadium. Three-quarters of the space is devoted to non-athletic purposes.

Sustainability has been a primary consideration during the design and construction of all three buildings, which seek to achieve LEED Silver certification. The buildings were designed and constructed to use less water and be as energy efficient as possible. Among the many sustainable design features is the installation of the largest green roof in Indiana as a means to mitigate storm water run-off, improve air quality, reduce noise, increase building insulation and conserve rainwater for release back into the atmosphere.

Hundreds of tradespeople worked on the buildings for the past 33 months, logging more than 3 million hours. To operate the new buildings through the year and, particularly on home football game weekends, the University is adding more than 60 full-time positions and some 765 part-time or on-call seasonal jobs.

In addition to adding to the labor force, the University expects the new facilities surrounding Notre Dame Stadium, as well as the stadium itself, to have a positive economic impact on the greater South Bend community beyond home football games. The University plans to host concerts, professional sports teams and other events in the stadium, and the hospitality spaces also will be available for large functions. The result will be additional visitors who will spend nights in local hotels, dine at restaurants, fill their gas tanks and use the services of other businesses throughout the community.

Many of the additions and improvements to Notre Dame Stadium will be unveiled during Kicks & Flicks Week, Aug. 20 to 25, featuring a scrimmage by the 2017 Fighting Irish football team at 3:30 p.m. Aug. 20 and Flick on the Field, an open house event featuring a screening of the movie “Rudy” on the stadium’s new video board at 7:30 p.m. Aug. 25.

The full range of fan enhancements to the football stadium will be on display for the Sept. 2 season-opening game, including:

Also opening for the upcoming fall semester are Jenkins Hall and Nanovic Hall, interconnected buildings on Notre Dame Avenue. Jenkins Hall – made possible by a gift from the late Donald R. Keough, a past chairman of the Board of Trustees, and his family and named in honor of Father Jenkins – will house the new Keough School of Global Affairs, the Keough-Naughton Institute for Irish Studies, Liu Institute for Asia and Asian Studies, Center for Civil and Human Rights, Kellogg Institute for International Studies, Kroc Institute for International Peace Studies, Ansari Institute for Global Engagement with Religion and the Notre Dame Initiative for Global Development. Nanovic Hall will house the Nanovic Institute for European Studies and the Departments of Economics, Political Science and Sociology. The buildings are a combined 185,000 square feet.

In addition, the 100,000-square-foot Walsh Family Hall of Architecture, made possible by a gift from Matthew and Joyce Walsh of Burr Ridge, Illinois, is under construction on the south edge of the campus and will open in December 2018.

A series of stories detailing each of the new buildings and their associated departments and programs, as well as new features to Notre Dame Stadium are forthcoming on ND.edu and UND.com. For more information about the project, including images and video downloads, visit crossroads.nd.edu.

Originally published by Dennis Brown at news.nd.edu on August 11, 2017.