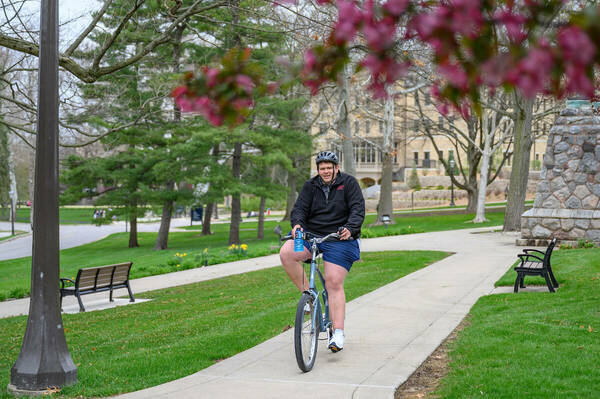 You may recognize Jerry Miller Jr. He began his 10 years at Notre Dame working in a dining hall and then moved to the Huddle Mart in the LaFortune Student Center. Miller recently accepted a new job outside of Notre Dame, and he wanted to do something big for the University as a thank-you for his time here. He decided to take his bike and cycle more than 270 miles with one goal in mind: to raise awareness and funds for Notre Dame’s Office of Student Enrichment.

Miller started his journey in Vincennes, Indiana, and last Wednesday he finished on campus at the Log Chapel. It’s close to the same path Rev. Edward F. Sorin, C.S.C., traveled by foot 180 years ago to found Notre Dame.

It wasn’t an easy ride. Over the span of seven days, Miller rode through harsh winds and across coarse gravel roads, and had to dodge farmers’ dogs during his journey. His mom, Kim Miller, office services coordinator in the Student Activities Office, traveled in a car behind Jerry. “Sometimes we would have to stop and take his bike into a local bike shop to be fixed. One time we had to wait three days to get the part we needed,” she said.

The Office of Student Enrichment, located in LaFortune where Jerry worked, was founded in 2015 with the aim of helping first-generation, low-income, under-resourced and/or undocumented students adjust to college life. The office provides a multitude of resources, ranging from workshops to football tickets to winter attire to laptops. The office even provides airfare and lodging to parents who would be unable to travel to campus otherwise. The office has fulfilled 1,400 student requests for such needs.

When asked why he felt called to help this program, Jerry said: “Obviously, Notre Dame is expensive to attend and get an education here. Some people may not be as fortunate and need help financially.”

Working at the University for so long, Jerry developed a fondness for the students and campus life. Contributing to the Office of Student Enrichment was important to him. “It means a lot to me, to give back and help out, he said.”

Jerry planned his fundraiser to coordinate with last month’s Notre Dame Day. While his ride didn’t conclude during that time frame, friends and family donated to Notre Dame Day, and specifically to the Office of Student Enrichment, as a recognition of Jerry’s efforts. Before Jerry began his bike ride, OSE had $200 in donations. Afterward, it had $1,000; Jerry generated at least half of that total or more. (Even though Notre Dame Day has passed, Notre Dame Day donations can be made to OCSE or other areas of the University any time.

Jerry would also like to give a shout-out to the football team, cheerleaders, pom squad and the Notre Dame leprechauns for their support. They motivated him on his ride to keep going.

Originally published by Brianna Bytner, NDWorks at ndworks.nd.edu on May 10, 2022.