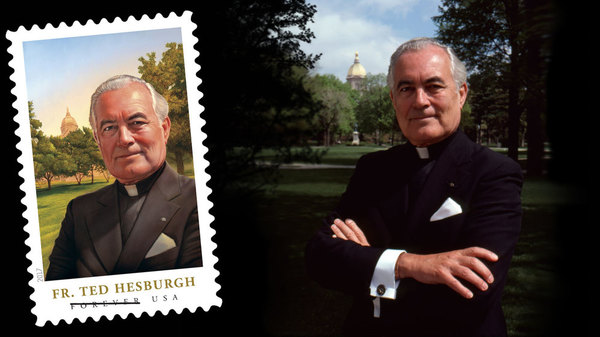 The legendary career of the late Rev. Theodore M. Hesburgh, C.S.C., the University of Notre Dame’s president from 1952 to 1987, will be celebrated Sept. 1 when the U.S. Postal Service unveils a 49-cent Forever stamp in his honor at a ceremony on campus. All are welcome to attend.

Beginning at 1 p.m. in Purcell Pavilion at the Joyce Center, the ceremony will feature remarks from Notre Dame alumna and former Secretary of State Condoleezza Rice, Postmaster General and Chief Executive Officer of the U. S. Postal Service Megan Brennan and Notre Dame’s president, Rev. John I. Jenkins, C.S.C.

In addition, Rev. Austin I. Collins, C.S.C., religious superior of Holy Cross Priests and Brothers at Notre Dame, will offer a welcome and invocation, and Rev. Thomas J. O’Hara, C.S.C., provincial superior of the U.S. Province of the Congregation of Holy Cross, will say the benediction. A short video on Father Hesburgh also will be featured. Former Notre Dame basketball coach Digger Phelps, who once served on the Postal Service’s Citizens’ Stamp Advisory Committee, will emcee.

In addition to his 35-year tenure as Notre Dame’s president, Father Hesburgh’s other notable achievements and accolades included:

Father Hesburgh was born May 25, 1917, and raised in Syracuse, New York. He was educated at Notre Dame and the Gregorian University in Rome, from which he earned a bachelor’s degree in 1939. He was ordained a priest of the Congregation of Holy Cross, Notre Dame’s founding order, in 1943.

Following his ordination, Father Hesburgh continued his study of sacred theology at the Catholic University of America in Washington, D.C., earning his doctorate in 1945. He joined the Notre Dame faculty the same year and served as chaplain to World War II veterans on campus in addition to his teaching duties in the Religion Department. He was appointed the head of that department in 1948, and the following year was appointed executive vice president in the administration of Rev. John J. Cavanaugh, C.S.C. At the age of 35 in June 1952, he was named the 15th president of Notre Dame.

The accomplishments of the Hesburgh era at Notre Dame are reflected in statistics comparing the Notre Dame of 1952, when Father Hesburgh became president, with the University he left in 1987. The annual operating budget rose from $9.7 million to $176.6 million, the endowment from $9 million to $350 million, and research funding from $735,000 to $15 million. Enrollment increased from 4,979 to 9,600, faculty from 389 to 950, and degrees awarded annually from 1,212 to 2,500. Two major changes during the Hesburgh era were the transference of governance in 1967 from the Congregation of Holy Cross to a two-tiered, mixed board of lay and religious trustees and fellows, and the admission of women to undergraduate studies in 1972.

Notre Dame has been recognized by the U.S. Postal Service on three previous occasions — in 1988 with a stamp honoring legendary football coach Knute Rockne, in 1998 with a stamp of the famous football backfield known as the Four Horsemen and in 1992 with a postcard celebrating the sesquicentennial of the University.

Originally published by Dennis Brown at news.nd.edu on August 08, 2017.