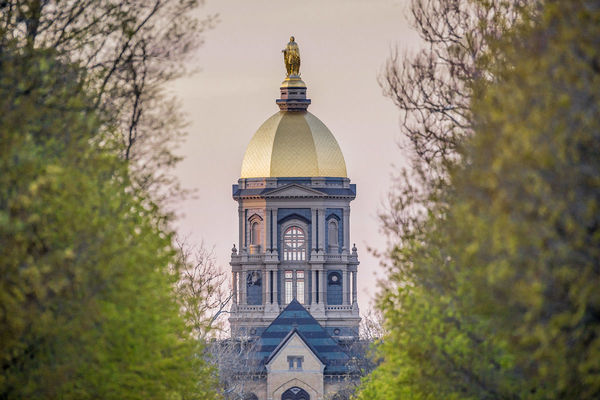 The view of the Notre Dame campus from the development and investment offices at Eddy Street Commons reflects the work of those inside.

Scott Malpass, vice president and chief investment officer, has that view from his office window. The picture changes with each passing season. New buildings go up. Green spaces and sculptures appear. New students and faculty arrive to campus, sometimes from faraway places. What does it feel like to see the impact of your work literally appear before your eyes?

“It’s incredibly fulfilling and gratifying when you can see what you do actually impact something over decades,” he said. 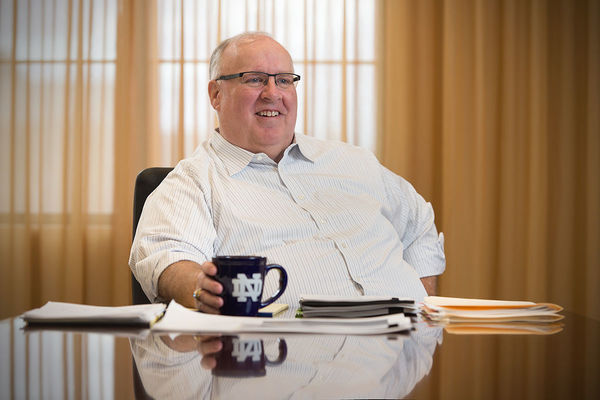 Vice President and Chief Investment Officer Scott Malpass, pictured, says of the tax, “People are still trying to interpret the regulations, which are not as clear as they should have been. It was a product of a very split Congress. My hope is that it’s repealed because it’s a very un-American excise tax.”

Especially so when the “something” is your alma mater.

Malpass is a double Domer, graduating in 1984 and then receiving a master of business administration degree from Notre Dame in 1986. He returned to the University in 1988 from a Wall Street firm and became chief investment officer of Notre Dame the following year.

Translation: Notre Dame’s endowment has grown 30 times the size it was 30 years ago. Let that sink in a minute. 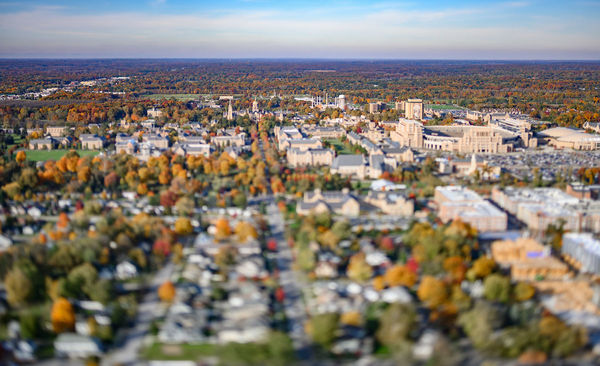 Aerial shot of the Notre Dame campus, Eddy Street Commons and adjacent neighborhood, taken from the south looking north. The campus footprint has doubled in 30 years, due to the spectacular work of the development and investment teams. The value of the endowment pool is 32.5 times what it was in 1989. (Photo by Matt Cashore)

The growth in the campus footprint (it’s twice what it was in 1989), the abundance of research taking place and study abroad opportunities that exist and the increased scholarships that make a Notre Dame education possible are directly correlated to the success of the endowment pool.

“Endowments have been at the heart of a lot of that,” said Malpass. “Donations and the growth of endowments over time and the spending power that’s given us is transformative.”

Endowments are designed to keep the principal amount of the donation intact while using the investment earnings to support various aspects of the University’s mission. Most endowments at the University support things like professorships, academics, scholarships and student life programs. Collectively, there are more than 6,500 endowments in Notre Dame’s endowment pool.

“You’re going to have millions of dollars flow out to pay this tax every year.”

Malpass works closely with the investment committee of the University’s Board of Trustees in partnering with the most sophisticated investment management organizations throughout the world. The Notre Dame endowment has achieved top-tier investment performance over both short- and long-term time periods.

“It starts with a very broad return objective,” Malpass said. “We need to make as much money as we can, given the risk we are willing to take. We’d like to earn inflation plus 5 to 6 percent on top of that. We think that’s a reasonable objective over time, and although it’s not achievable every year, it’s not meant to be a one-year goal. It’s meant to be a multiple-cycle goal of decades.”

He calls endowments the eighth wonder of the world.

“Over time, endowments compound and they throw off more earnings, so these organizations grow and they’re helping all kinds of important purposes,” Malpass said.

Up until now, the government generally has not taxed the endowments of nonprofits.

“I think the founders of this country knew there were a lot of activities the government would have to perform if they didn’t allow the charitable sector to do so,” Malpass said. “So they were happy to have organizations crop up that could manage these kinds of activities, whether it’s higher education or cultural entities like museums, fine and performing arts, and community foundations.”

It has also benefited nonprofits that the tax code incentivizes philanthropists to give to charitable organizations by allowing them to write the donations off their taxes.

Now the government has changed the rules. A select few private universities with large endowments face an excise tax starting with the recently completed fiscal year 2019.

In 2017, Congress voted to impose a 1.4 percent excise tax on endowment earnings and certain other earnings at universities with $500,000 of endowment per student. The formula exempts public universities and affects 30 elite private universities, including Notre Dame.

“People are still trying to interpret the regulations, which are not as clear as they should have been,” Malpass said. “It was a product of a very split Congress. My hope is that it’s repealed because it’s a very un-American excise tax.”

Among those interpreting the regulation is the U.S. Department of the Treasury, which oversees the IRS. The public comment window is open October 1.

“With all the general uncertainty, the Treasury genuinely is interested in hearing what taxpayers have to say,” Malpass said. “Then after digesting the public comments, the regulations will be issued in final form. Presumably this will be done in time to be applicable for the tax relative to fiscal year 2020.” (To learn more or to comment, visit go.nd.edu/review.)

In short, what would the tax mean for Notre Dame?

“You’re going to have millions of dollars flow out to pay this tax every year,” said Malpass, adding that the first year could cost the University $3.5 million on endowment earnings and that would likely grow as the years go on.

“That money could be used instead for financial aid or used for scholarship and faculty resources and support,” he said.

But Malpass noted that the University will not dip into the principal to make up the difference.

“You don’t want to cannibalize your future,” he said of the endowment pool. “It violates the basic principle of intergenerational spending. It’s really going to be more about getting new endowments, investing them, and then those funds provide additional resources for students. That’s how we’re going to fill the gap.”

If you’d like to read what Notre Dame President Rev. John I. Jenkins, C.S.C., has written on the subject, visit go.nd.edu/excisetax.

Originally published by Gwen O’Brien at ndworks.nd.edu on September 12, 2019.